If you ever go to Seoul, you must try some of their amazing street food. In Seoul, it's popular to buy street foods from Pojangmacha (포장마차), which is street cars by day that becomes little tents at night. At daytime, people are busy, and will only stop by to buy something quickly, and then they will get going. But at night, they put out chairs and tables and it becomes a tent that sells foods and drinks. Korea has lots of interesting street foods, simply something for every taste.

Korean pancake with syrup filling. It's a lot easier to keep the syrup in the middle instead of on top of it - then it would be all over, right? Also, the pancakes are only hand-sized, so their super easy to pick up on the way. This is popular street food in Seoul at winter time, when it's all chilly it must be nice with a stack of delicious mini-pancakes. 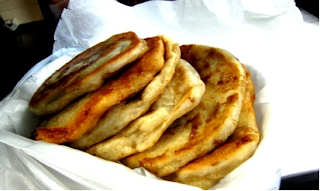 Waffle-ish cake-bread baked fish-shaped.
It's made in a special iron, and waffle batter is poured in.
Then, it's filled with sweet bean paste,
covered in a little more batter, and then pressed.
These are really popular.
Usually enjoyed in autumn or winter time,
also great with a... hot... fish cake... at cold times..? 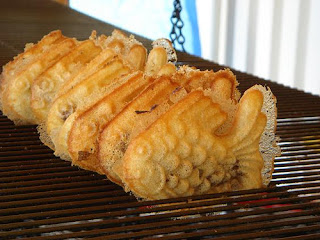 Tteokbokki, ddeokbokki or topokki is a really famous Korean dish. It's made from sliced rice cake,meat, eggs and seasoning (stir fried rish cake). Because it's so popular, a lot of different Tteokbokki's has been made. There's chicken Ttokbokki, curry Tteokbokki, Pasta tteokbokki, cheese Ttokbokki and much more.The most famous one among Korean must be Rabokki ( 라볶이), which is a combination of Tteokbokki and Ramyeon (Korean version of ramen, instant noodles). Eaten during winter season. 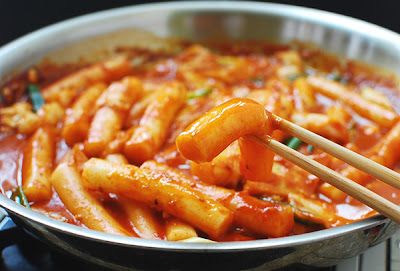 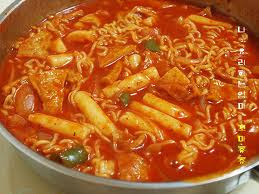 First, it's starts of being a mound of hardened honey and kneaded malt. Then it gets streched into 16,284 strands. At this point it looks like a white, fine, soft white skein. Then it's filled with 10 ingredients such as almonds, walnuts, peanuts, black beans and black sesame seeds, and then rolled. Imagine eating this: Does it taste as hairy as it looks? Must be so fun to eat. 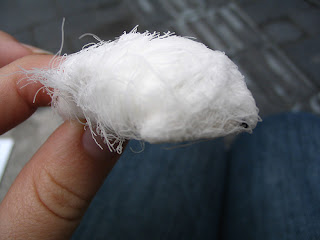 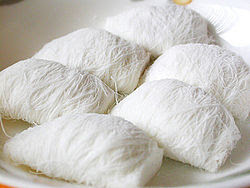 Probably the most popular Korean street food. It's made from white steames rice and various other ingredients inside, rolled in seaweed and served in bite-sized slices. I know what you're thinking: sushi. Aaand it's not. Well.. It sure looks like it.. And sure reminds a lot of it. But the Korean version of sushi right here is different in the ingredients. Sushi usually only have some rice and then a slice of fish, or maybe some other stuff in the middle (if it's in rolls.) But Korea's version here has lots of lots of things inside, and the slices are usually bigger. They like to use ingredients with different colors to make it look fancy or something. Also, the korean version doesn't have raw fish. Inside this roll could be cheese, kimchi, meat, spicy squid or spicy tuna. In most Korean convenience stores, you can buy triangle-shaped kimbap, Samsak Kimbap(삼각김밥). 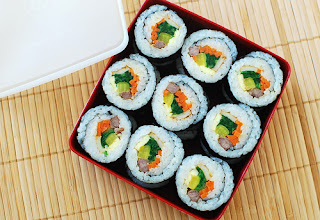 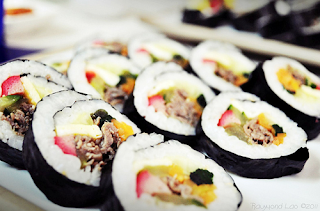 Mandu is a type of Korean dumplings filled with mixed meat, garlic, ginger, tofu, or green onions and mostly served with a sauce made from vinegar and soy sauce. When they're fried they're called gunmandu (군만두), when they're steamed they're jjinmandu (찐만두), and when their boiled they're called mulmandu (물만두). 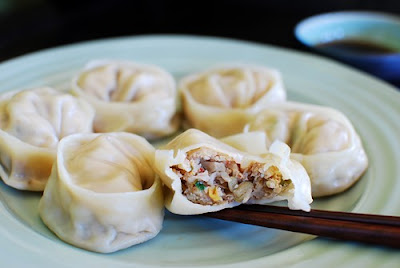